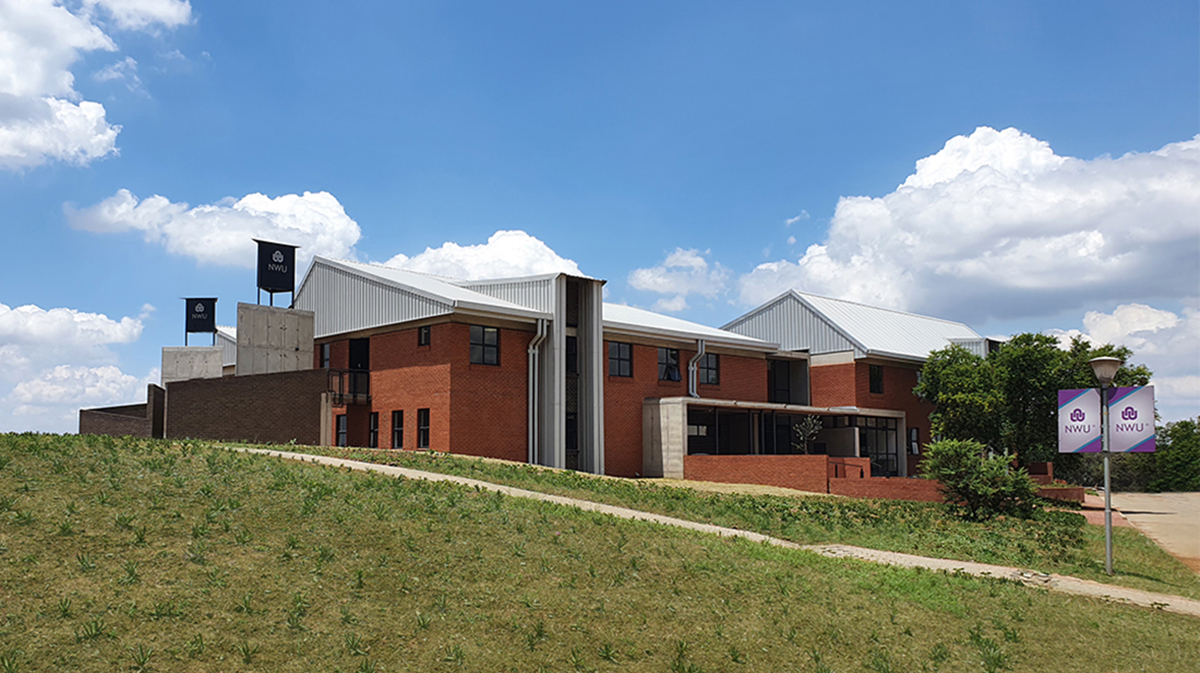 A new administration building for one of the three North-West University’s campuses, the NWU Vaal Campus was designed by award winning firm Mathews and Associates Architects. The campus had served as a satellite campus but with a growing student population the campus is expanding. Lead architect Pieter Mathews and his team made some master plan suggestions which will be implemented in phases, the first being the new administration building.

The new administration building is located at the entrance to the campus to serve as a landmark building, a first point of call for the visitors. Two tall, branded towers ushers them closer.

The client had a very pragmatic brief, dictated by the norms and standards as set out by the Department of Higher Education. The building serves many functions, all of which had to be well considered and designed for. As there are many different users including prospective students, visitors, people with financial queries, university students and staff as well as the deputy vice chancellor, the complexity of access and use had to be well choreographed. The different functions were grouped together in a hierarchy ranging from very public to very private. 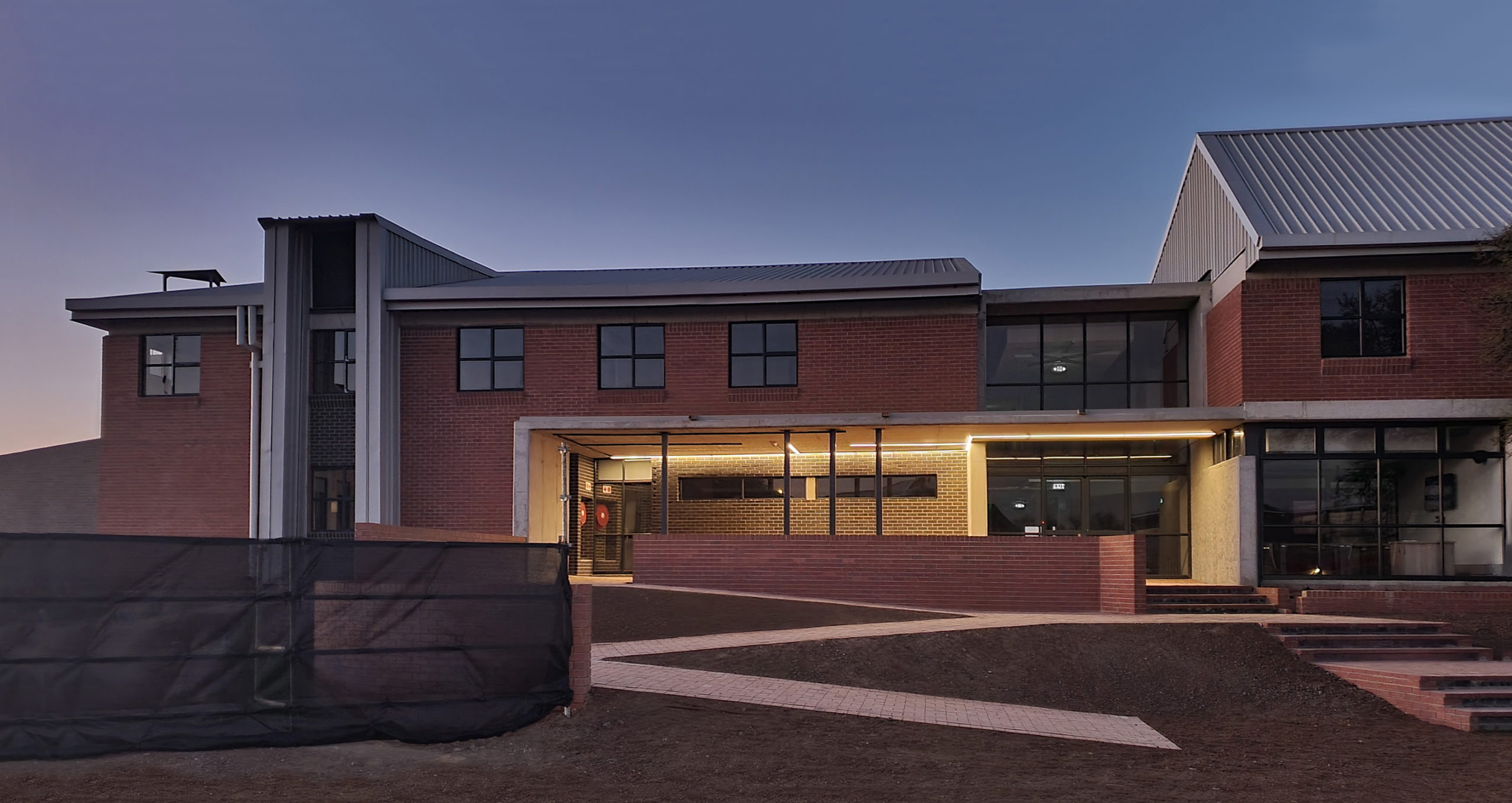 Many more-established university campuses are known for their symmetrical main buildings. Mathews and Associates Architects decided to contradict this notion by creating a definite asymmetrical building, thereby establishing a new aesthetic for the campus – looking towards the future. One of the two wings of the new administration building is dedicated to public interactions whilst the other is staff-oriented: office spaces, meeting rooms etc.

The building is built on higher ground level requiring the user to ascend to reach the entrance. This symbolises the academic notion of how hard work allows the student to reach their academic goal of higher learning.

A generous staircase leading to the main entrance is defined by a diagonal wall which serves to lead the visitor to the entrance. The public entrance was designed with a spacious horizontal entrance to allow for students to que when registering in a long line on the stramp; a combination of stairs and ramps. The entrance to the Deputy Vice-Chancellor’s office protrudes from a design focal point – a pixelated map of the Vaal River translated onto a façade canvas with a dark brick. This major artwork celebrates the site-specific nature and unique spirit of place.

Although form had to follow function, no stone, or rather brick, was left unturned to create a unique experience for the visitor and end user alike. Passages with curved shapes serve as a subtle wayfinding devices directing visitors by soothing circulation through heavy-traffic areas. Courtyard space and break-away spaces create pause moments whilst ensuring that all boardrooms and offices get ample natural light. The glass elevator keeps the user visually connected with the interior while showcasing the mechanics as functional art. The slit windows are used to open views to the landscape. 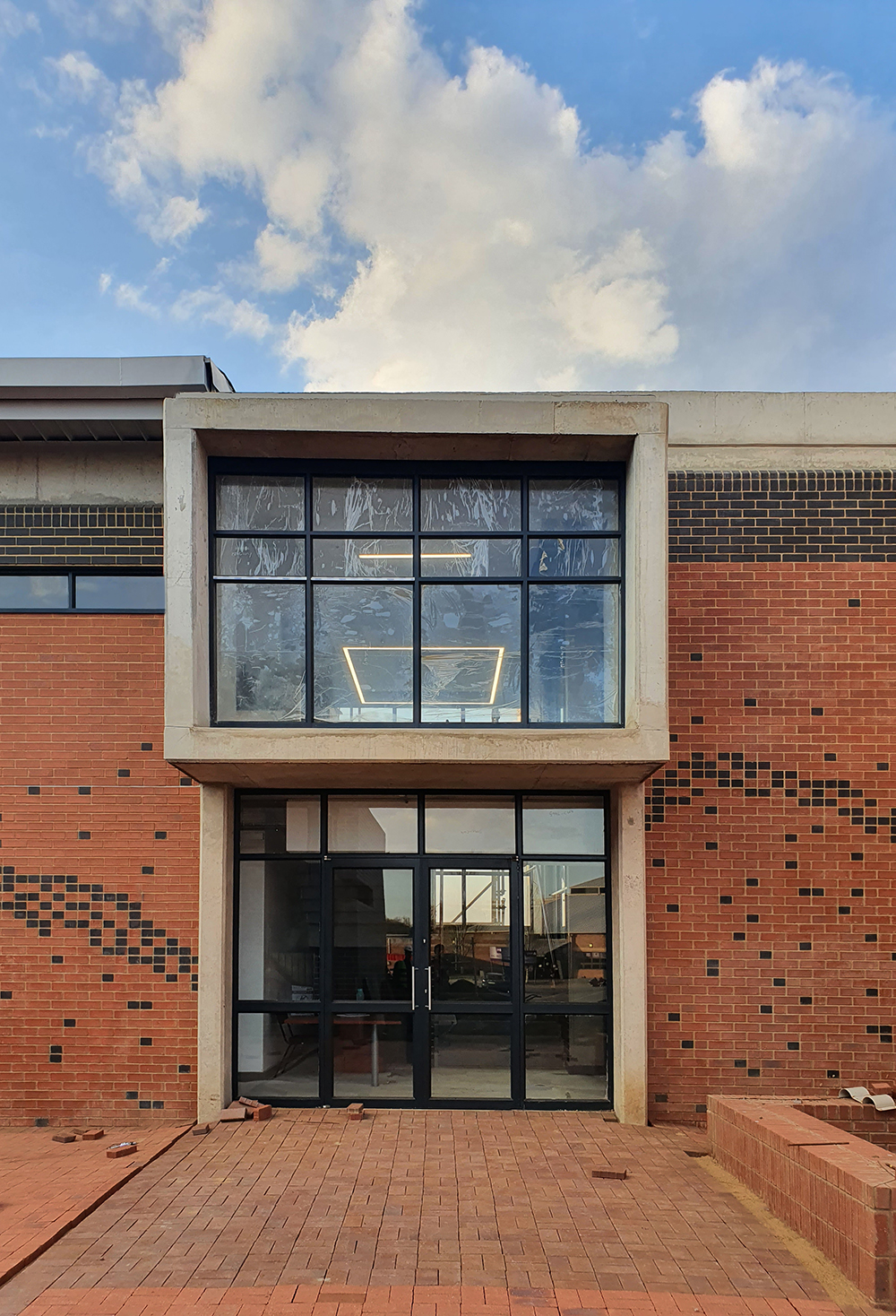 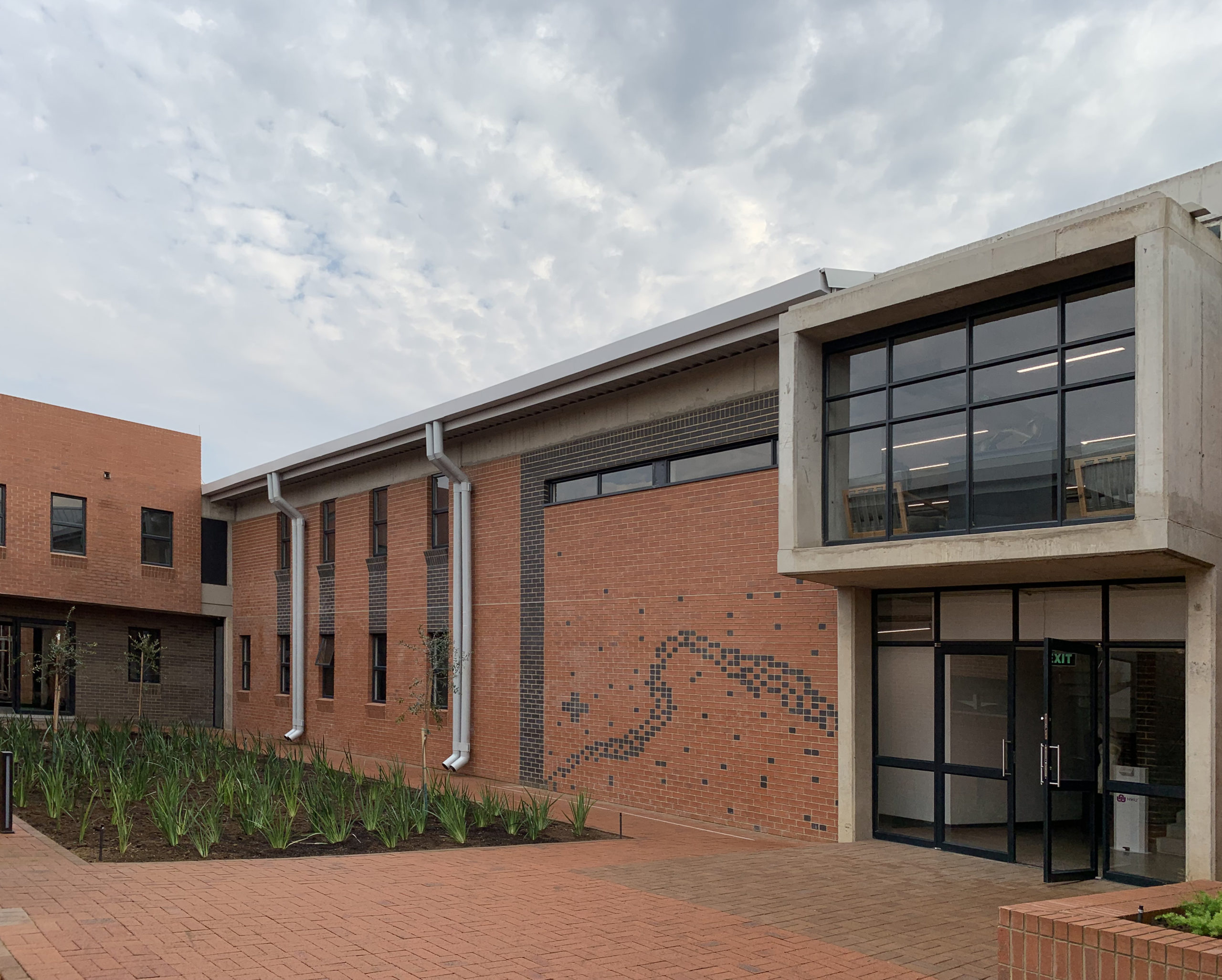 As the building had to accommodate a substantial amount of traffic, the materials had to be robust and durable; brick, concrete and factory coated roof sheeting were ideal. The materials also help with natural heat retention whilst the white roof assists in maintaining a cooler building in the summer months.

The interior of the spaces offered a great opportunity and responsibility. To ensure the visitor with a memorable architectural experience, gallery curator, Amohelang Mohajane, together with Pieter Mathews and Prof Jaco Hoffman, curated many prominent artworks from the NWU Art Gallery collection in various spaces. In the passage leading to the council chambers a salon style exhibition was curated with the assistance of students from the campus. The curation of art completes the interior and allows visitors to appreciate a beautiful collection which otherwise would have been locked away in their gallery archive. 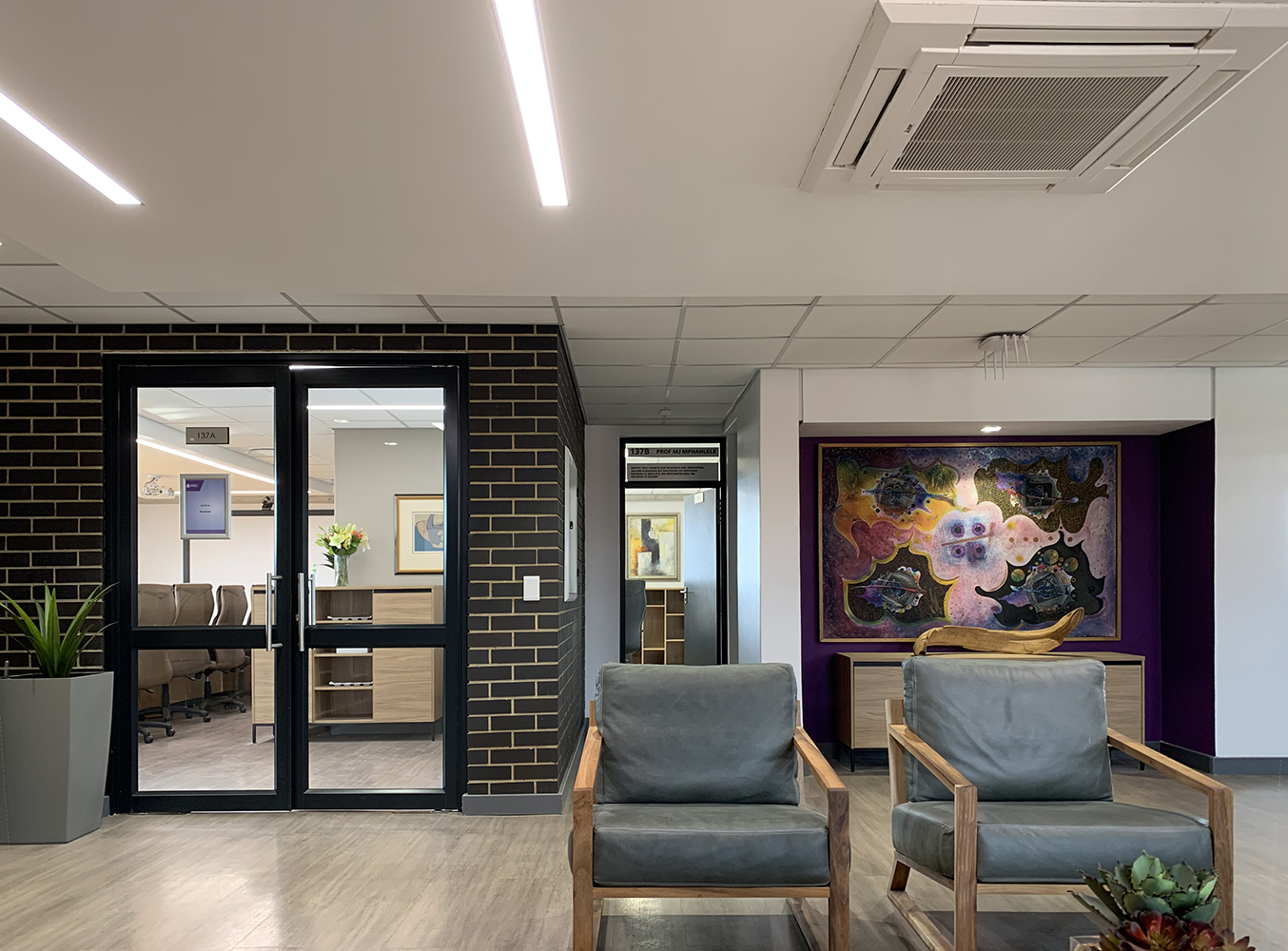 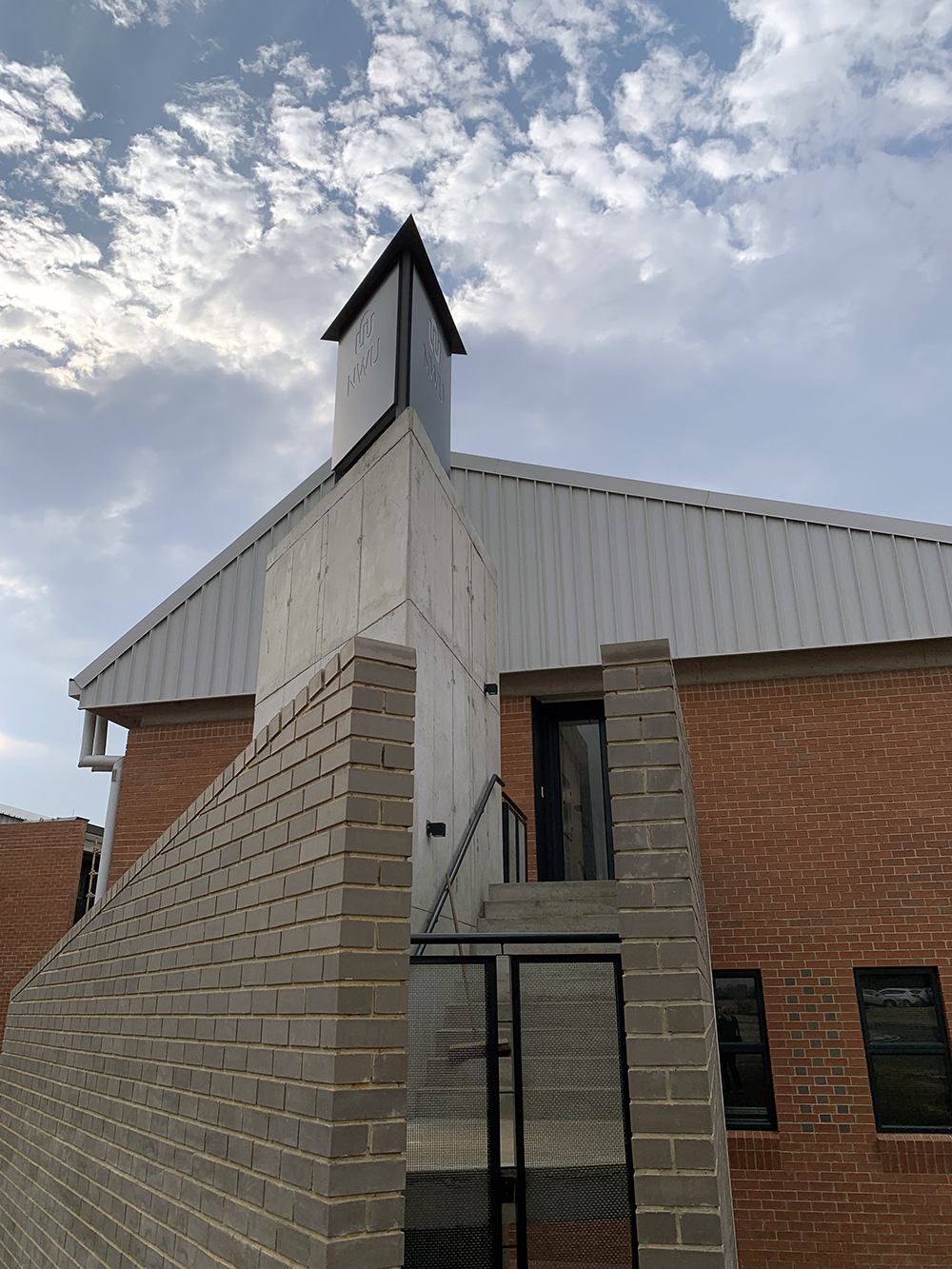 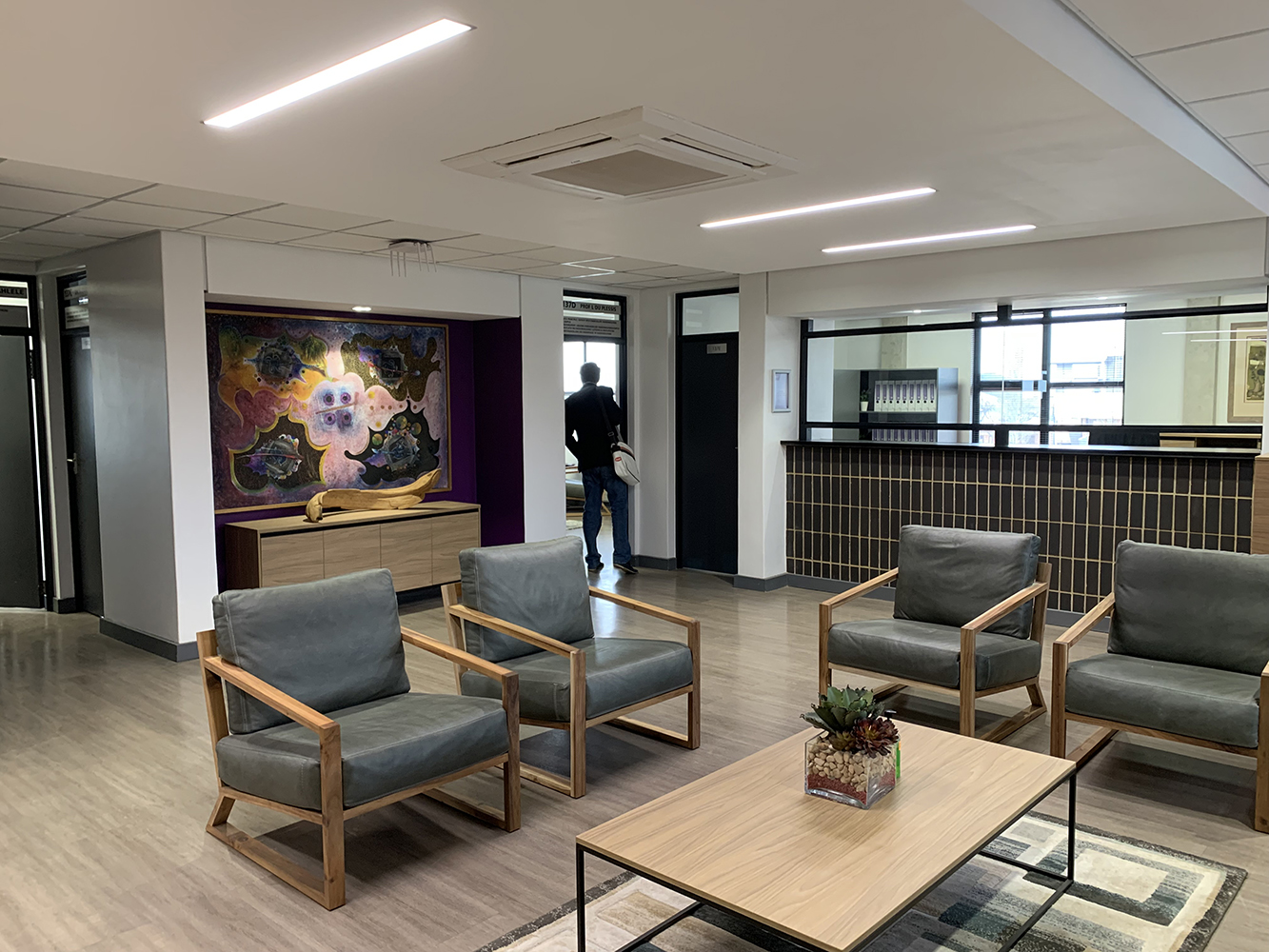 The university’s corporate colours were incorporated into the design. Purple, the main colour, was used subtly as focal walls. Some of the artworks were curated specifically for certain spaces to pick up on the prominent purple of these focal walls.

The garden and landscaping were not part of the architect’s contract and was to be carried out by the client; MAAA however, offered their design expertise in order to ensure a complete, final and comprehensive design. By working closely with the NWU’s botanists and facilities management the design proposed to enhance the project and pick up on the corporate colours. Fields of purple Agapanthuses in full bloom compliments the new vision for the North-West University Vaal Triangle and its new administration building.

Architecture, landscaping, art and interior working in unison to achieve an end result that President Cyril Rhamaphosa mentioned in the unveiling of the new Corobrik Kwastina factory. 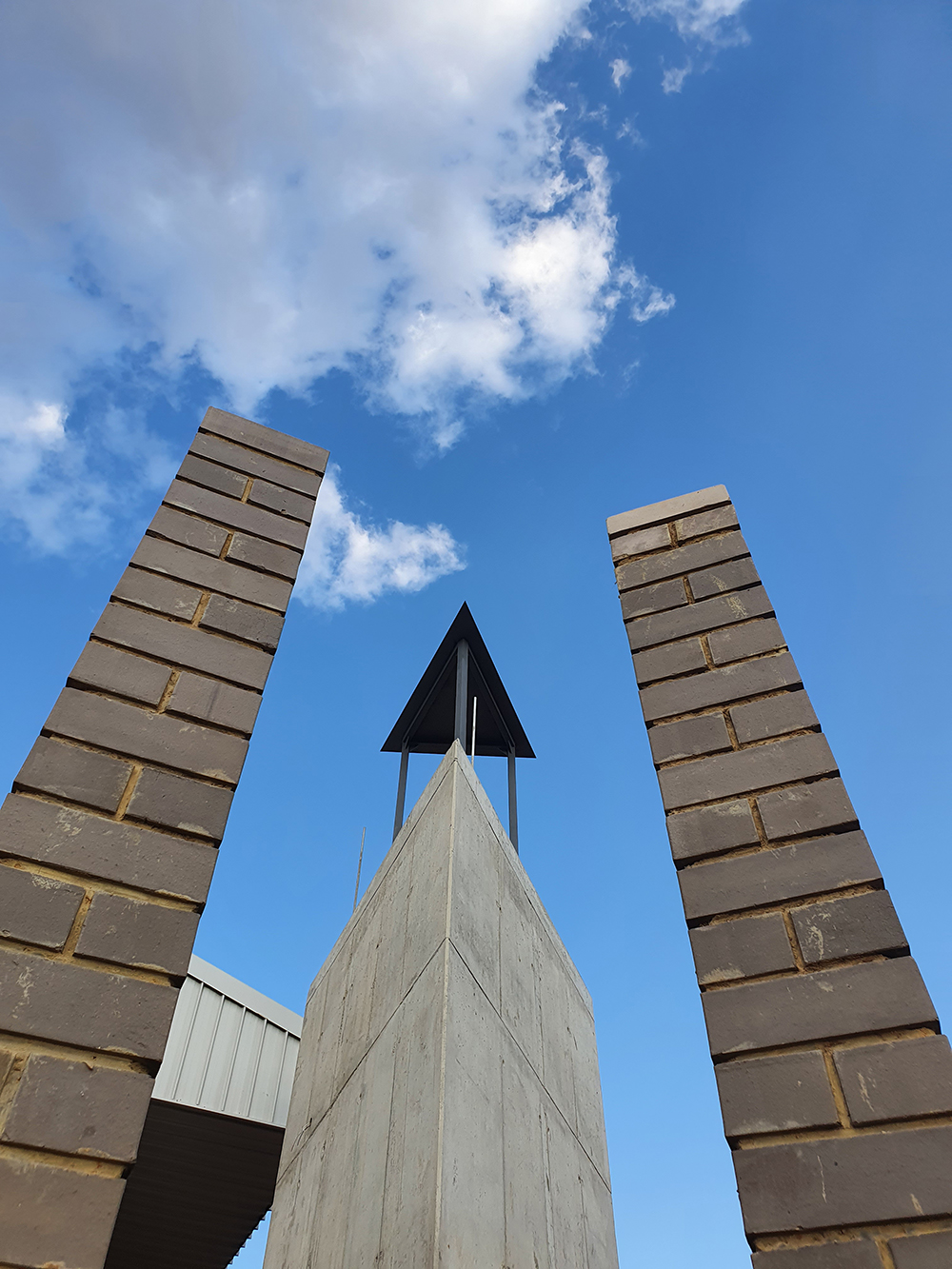 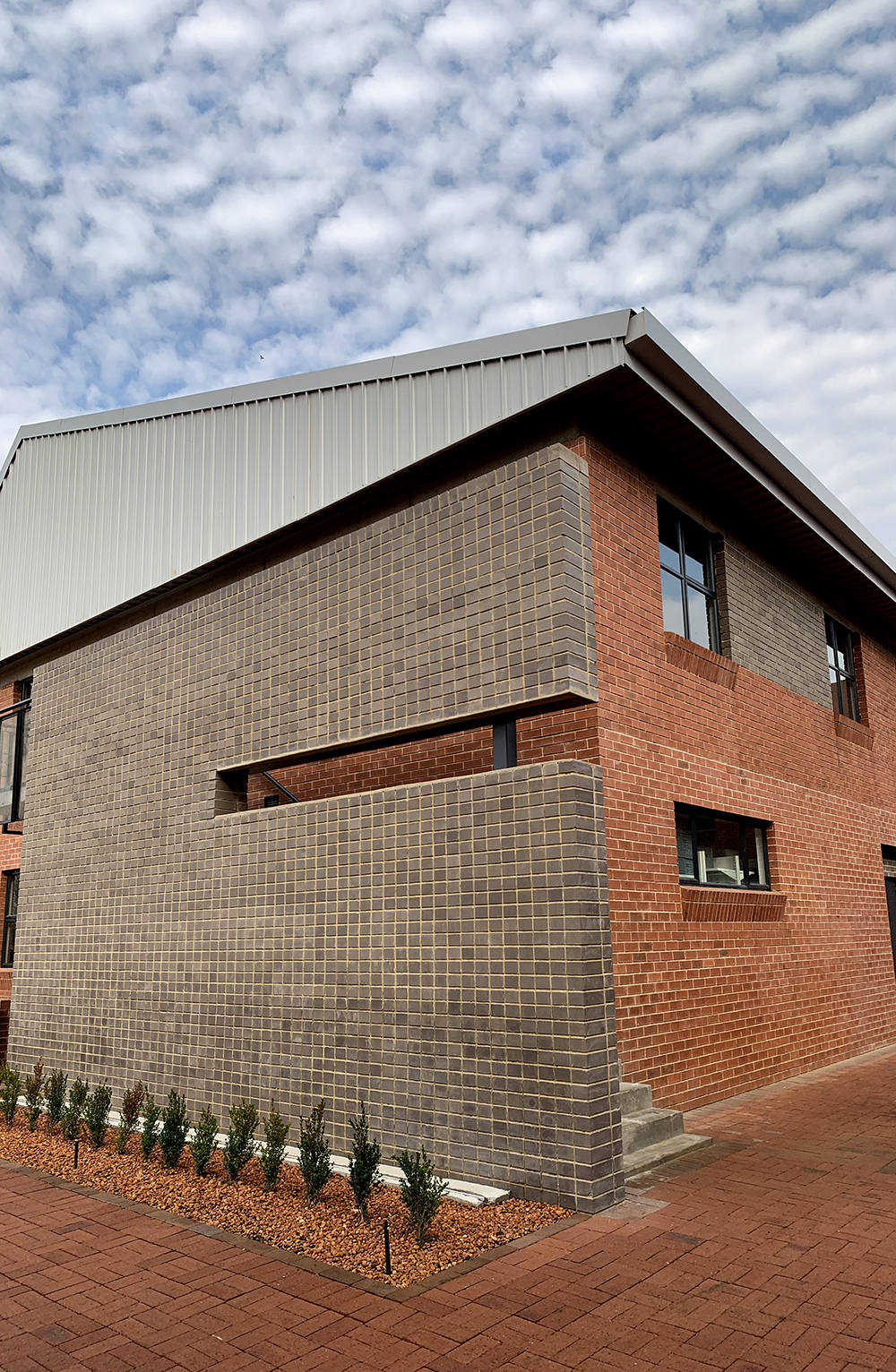 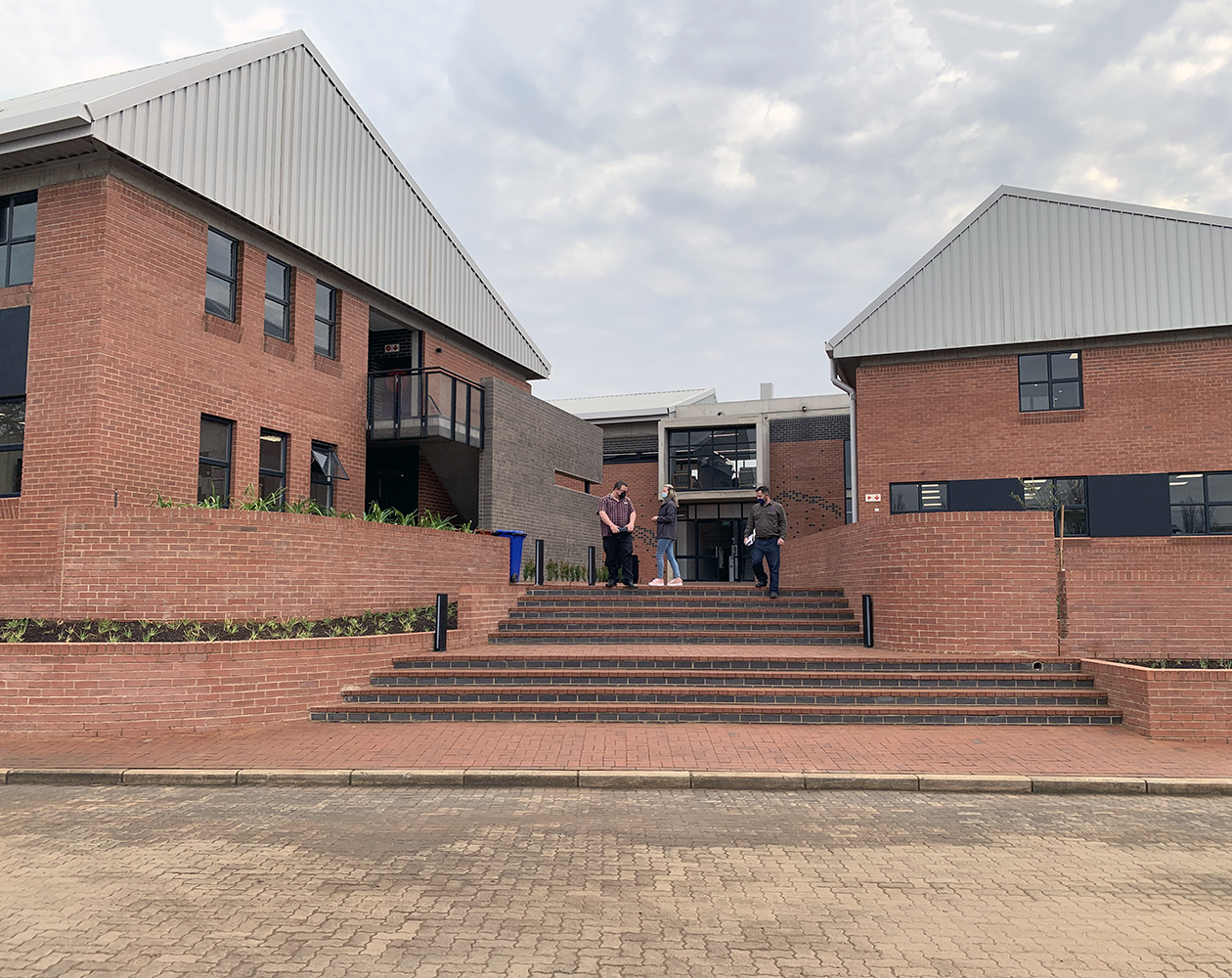